Our New VCP6.5-DCV Study Guide page is starting to fill up with topics from the Exam Preparation Guide (previously called Exam Blueprint).

Right now you have a choice to study towards the VCP6-DCV – Exam Number: 2V0-621, ( it has 28 Objectives) or going for the VCP6.5-DCV (Exam Code: 2V0-622) which is few chapters longer (it has 32 Objectives). Both exams are valid for two years, then you have to renew. You can also go further and pass VCAP exam (not expiring).

Some of the screenshots are from 6.0. While the differencies between 6.0 and 6.5 are quite minimal, there are some. Enable or disable Network I/O control via the drop-down menu.

In order to connect your host to a vSphere Distributed Switch (vDS) you should think twice and prepare ahead. You might want to before:

You can use the Add and Manage Hosts wizard in the vSphere Web Client to add multiple hosts at a time.

Removing Hosts from a vSphere Distributed Switch – Before you remove hosts from a distributed switch, you must migrate the network adapters that are in use to a different switch.

To remove a port group. Simple. Right-click on the port group > delete… 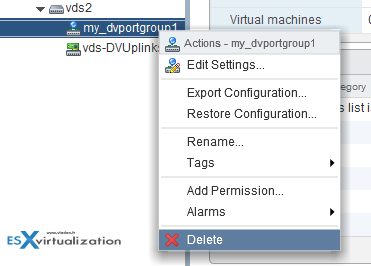 If you want to add/remove (increase or decrease) a number of uplinks you can do so by going to the properties of the vDS. For consistent networking configuration throughout all hosts, you can assign the same physical NIC on every host to the same uplink on the distributed switch.

Right-click on the vDS > Edit settings 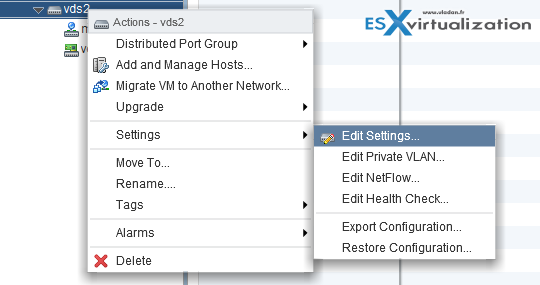 And on the next screen, you can do that… Note that at the same time you can give different names to your uplinks… 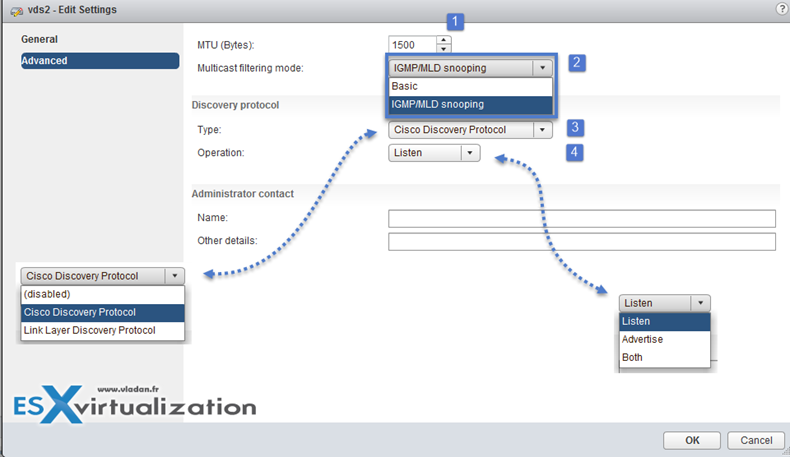 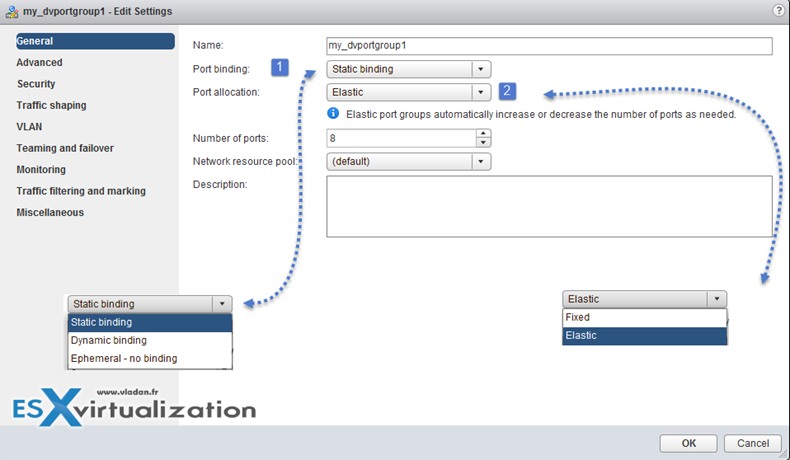 VMkernel adapters can be add/removed at the Networking level 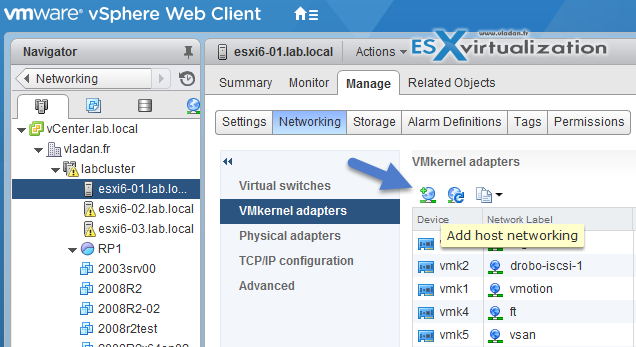 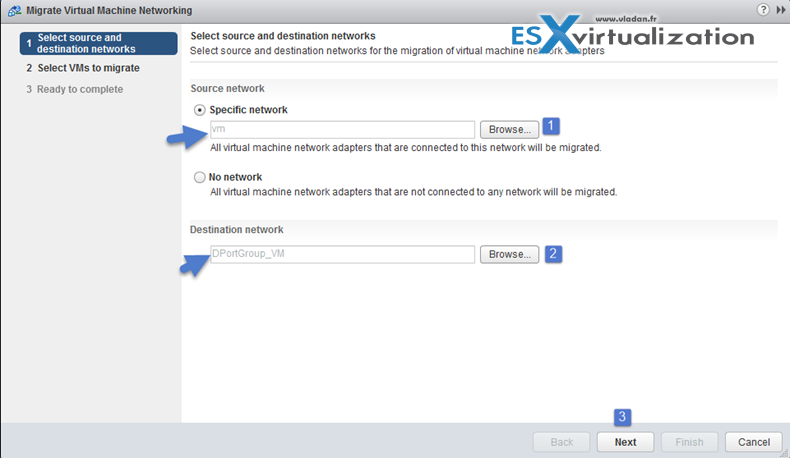 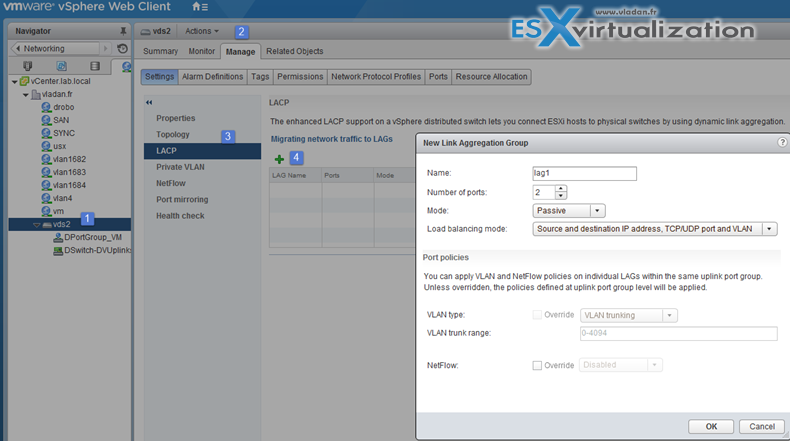 LAG Mode can be:

Note that you must configure the LNB hashing same way on both virtual and physical switch, at the LACP port channel level. Network security policies can be set on each vDS PortGroup. Private VLANs allows further segmentation and creation of private groups inside each of the VLAN.  By using private VLANs (PVLANs) you splitting the broadcast domain into multiple isolated broadcast “subdomains”.

Private VLANs needs to be configured at the physical switch level (the switch must support PVLANs) and also on the VMware vSphere distributed switch. (Enterprise Plus is required). I’ts more expensive and takes a bit more work to set up.

The graphics show it all… 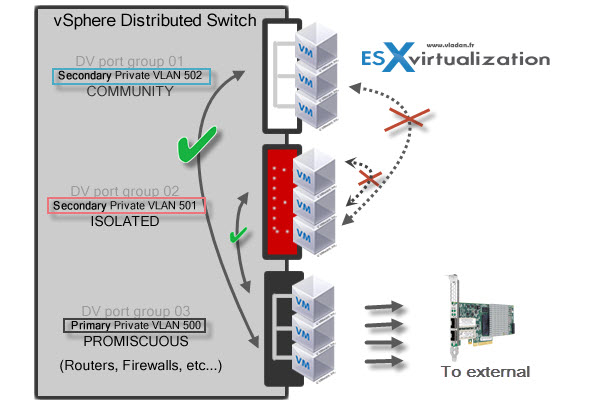 Traffic shaping policy is applied to each port in the port group. You can Enable or Disable the Ingress or egress traffic

Use TCP Segmentation Offload (TSO) in VMkernel network adapters and virtual machines to improve the network performance in workloads that have severe latency requirements.

When TSO is enabled, the network adapter divides larger data chunks into TCP segments instead of the CPU. The VMkernel and the guest operating system can use more CPU cycles to run
applications.

By default, TSO is enabled in the VMkernel of the ESXi host, and in the VMXNET 2 and VMXNET 3 virtual machine adapters

here are many places where you can enable Jumbo frames and you should enable jumbo frames end-to-end. If not the performance will not increase, but rather the opposite. Jumbo Frames can be enabled on a vSwitch, vDS, and VMkernel Adapter.

By rolling configuration changes back, vSphere protects hosts from losing connection to vCenter Server as a result of misconfiguration of the management network.

Starting vSphere 6.0 you have a possibility to migrate VMs between vCenter Server instances. You'll want to do that in some cases, like:

The migration process performs checks to verify that the source and destination networks are similar.

If the source and destination distributed switches are not in the same broadcast domain, virtual machines lose network connectivity after migration.

When you configure vDS on a vCenter server, the settings are pushed to all ESXi hosts which are connected to the switch.

The vSphere Distributed Switch introduces two abstractions that you use to create consistent networking configuration for physical NICs, virtual machines, and VMkernel services.

For example, the VMkernel adapters vmk0 and vmk1 can be configured on a host.

If you set 172.16.1.1 as the default gateway for vmk1, vMotion uses vmk1 as its egress interface with the gateway 172.16.1.1. The 172.16.1.1 gateway is a part of the vmk1 configuration and is not in the routing table. Only the services that specify vmk1 as an egress interface use this gateway. This provides additional Layer 3 connectivity options for services that need multiple gateways.

Port Mirroring. ERSPAN and RSPAN allow vDS to mirror traffic across the datacenter to perform remote traffic collection for central monitoring. IPFIX or NetFlow version v10 is the advanced and flexible protocol that allows defining the NetFlow records that can be collected at the VDS and sent across to a collector tool.

You can create a custom TCP/IP stack on a host to forward networking traffic through a custom application.

The custom TCP/IP stack is created on the host. You can assign VMkernel adapters to the stack.

You can analyzeVMs IP traffic that flows through a vDS by sending reports to a NetFlow collector. It is vDS 5.1 and later which supports IPFIX – Netflow version 10.

There you can set collector port, Observation Domain ID that identifies the information related to the switch, and also some advanced settings such as Active (or idle) flow export timeout, sampling rate or to process internal flows only.

The exam has 70 Questions (single and multiple choices), passing score 300, and you have 105 min to complete the test. Price: $250. Wish everyone good luck with the exam.