We continue to fill our VCP6.5-DCV Study guide page with one objective per day. Today's chapter is VCP6.5-DCV Objective 4.1 – Perform ESXi Host and Virtual Machine Upgrades. There is no particular order when those chapters are published, but each chapter is a single blog post with a maximum of screenshots. Our previous study guide covering VCP6-DCV exam was, as we heard, very much appreciated.

As you know, the latest vSphere 6.5 has now its certification exam. (since April). Not many guides are online so far, so we thought that it might be (finally) perhaps, a good idea to get things up.

I think the majority of new VCP candidates right now will go for the VCP6.5-DCV even if the VCP6-DCV seems less demanding. There are fewer topics to know.

The exam has 70 Questions (single and multiple choices), passing score 300, and you have 105 min to complete the test.

You can configure the Update Manager server to download patches and extensions for ESXi hosts or upgrades for virtual appliances from:

With VMware Update Manager (VUM) it's possible to import VMware patches, but also third-party patches. You can do so by importing those manually from a ZIP file (offline bundle). Import of offline bundles is supported only for hosts that are running ESXi 5.0 and later.

You download the offline bundle ZIP files from the Internet or copy them from a media drive, and save them on a local or a shared network drive. You can import the patches or extensions to the VUM patch repository later. You can download offline bundles from the VMware Web site or from the Web sites of third-party vendors.

TIP: There are differences between host baselines and VM baselines.

When you scan hosts, virtual machines, and virtual appliances, you evaluate them against baselines and baseline groups to determine their level of compliance.

Baseline Types – VUM supports different types of baselines that you can use when scanning and remediating objects in your inventory.

Baseline Groups – Baseline groups can contain patch, extension, and upgrade baselines. The baselines that you add to a baseline group must be non-conflicting.

In order to see a compliance information (whether the host needs to be patched or not), you need to first attach existing baselines and baseline groups to the objects within your inventory, which needs to be scanned.

Select the type of object in the vSphere Web Client object navigator. (ex Cluster) > go to the Update manager TAB > Attach baseline or baseline group select baseline to attach to the selected object.

When you're scanning objects (VMs, hosts, clusters), those are compared to patches, extensions, and upgrades included in the attached baselines and baseline groups.

Staging is a process where you “push”  patches and extensions from VUM to the ESXi host. The patches are stored at the ESXi host and wait there to be deployed. It “prepares” the patches at their destination so the remediation process is then faster. It's clever as the maintenance window can be shortened.

Obsolete patches – VMware VUM can stage only patches that it can install in a “subsequent remediation process“, after a scan of ESXi host.  If a patch is obsoleted by patches in the same selected patch set, the obsoleted patch is not staged.

Prescan and Postscan – VUM executes prescan and postscan operations to be able to update the compliance state of the baseline.

After Remediation, all staged patches or extensions are deleted by the hosts from its cache. Select the patch and extension baselines to stage on the Baseline Selection page of the Stage wizard > select hosts > Next. > Review > Finish.

You can also deselect patches and(or) extensions to exclude from the stage operation. It's also possible to search within the list of patches and extensions, enter text in the text box on the righ hand side.

During remediation, virtual appliances must be able to connect to the Update Manager server. You can also remediate templates by using VUM.

VMware tools can be upgraded (updated) as a part of the process, but a restart is necessary.

VUM present in vSphere 6.0 is able to remediate hosts of version ESXi 5.x against offline bundles that has been manually imported.

It’s non-disruptive operation, so no downtime. 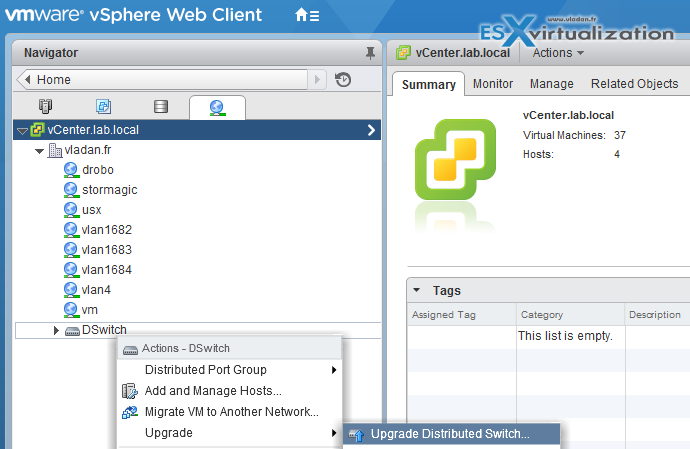 VMware tools can be upgraded automatically or manually. It's possible to configure VMs to check latest versions of VMware Tools too at power ON.

Within the Guest OS, there is a status bar (Windows) which shows you whether a new version is available. The Yellow (caution) icon shows up when a VMware Tools upgrade is available.

To install a VMware Tools upgrade: Same as clean install.

Automatic configuration of VM tools installation/upgrade  – The automatic upgrade will trigger when you power off or restart the virtual machine. The status bar displays the message “Installing VMware Tools”.

VMware highly recommends that you upgrade to the most updated version of the VMware Tools.

You can upgrade the Virtual machine hardware (VMX) to the latest version of ESXi in use. Then, the VM's virtual hardware is upgraded to the latest supported version. (you have no choice between version, like in the previous example).

During host scan, the host is compared to the VIBs from the upgrade image. The host scanned against an upgrade baseline compares the ISO image referenced in the baseline. If the ISO is the same version as the target host, VUM shows “Compliant” (or Non-compliant if it's not).

You can remediate in parallel too:

When you remediate a cluster of hosts in parallel, VUM does the remediate actions on multiple hosts at the same time. During parallel remediation, if VUM finds an error when remediating a host, it ignores the host and the remediation process continues for the other hosts in the cluster. VUM continuously evaluates the maximum number of hosts it can remediate concurrently without disrupting DRS settings. You can limit the number of concurrently remediated hosts to a specific number.

VUM remediates hosts that are part of a vSAN cluster sequentially even if you select the option to remediate them in parallel. The reason is that by design only one host from a vSAN cluster can be in a maintenance mode at any time.

VUM baselines are hosts baselines, virtual machine baselines, and virtual appliance baselines. In order to upgrade objects within your environment,  it's possible to use:

Depending on the purpose for which you want to use them, host baselines can contain a collection of one or more patches, extensions, or upgrades. Therefore host baselines are upgrade, extension, or patch baselines. To update or upgrade your hosts you can use the Update Manager default baselines, or custom baselines that you create.

The system managed baselines automatically update their content periodically, which requires Update Manager to have constant access to the Internet. The vSAN system baselines are typically refreshed every 24 hours.

You can use the system managed baselines to upgrade your vSAN clusters to recommended critical patches, drivers, updates or latest supported ESXi host version for vSAN.

Predefined Baselines – Predefined baselines cannot be edited or deleted. The only action are: Under the VMs/VAs Baselines tab Update Manager Admin view, you can see the following predefined baselines: