Normally we would not put such a simple topic on a blog, but with so many disinformations around, we thought that this might be just another nontechnical post explaining VMware Terminology. But here it is. This post will explain with simple words What is VMware Hyper-Converged Infrastructure and VMware vSAN.

We're usually writing technical posts or posts giving IT and VMware admins some tips on how to configure, upgrade and maintain VMware infrastructures, but recent successful post (share over 2.3K over our social media channels) was not really technical – What is The Difference between VMware vSphere, ESXi, and vCenter.

What is VMware Hyper-Converged Infrastructure?

VMware Hyper-converged Infrastructure (HCI) is software driven and when you pick a bunch of servers with some local storage in each one of those, a VMware vSAN software can literally transform this local storage which is in each of those hosts, into a single datastore visible to all hosts participating in the VMware vSAN cluster.

Note that you can't just use ANY hardware, but only hardware which is on VMware HCL for vSAN. Better yet, the most easier is to pick a VMware vSAN ready node which is pre-configured with hardware compatible for VMware vSAN.

On the screenshot below you can see the individual hosts, each populated with local storage and the virtual SAN datastore. It spans all the hosts. Yes, each host participates with its local storage, to the shared pool datastore.

Well, I think we cannot be more simple with our explanations. We have published tons of articles on VMware vSAN over the past 3 years. It's worth to mention that the latest VMware vSAN 6.6 release which has been released just a few weeks ago, has the largest number or innovations and improvements. You can find our detailed article about VMware vSAN 6.6 here – VMware vSAN 6.6 Announced.

The product went GA about a week after the announce. There were quite a few folks asking for the download link, but as we mentioned in the post, it is an announce, not a release. But this isn't new. VMware now always announces new release, but then the availability of the bits isn't always immediate… -:)

We were pleased to upgrade the lab with the vSAN 6.6 All-Flash and to find out that everything worked, after driver and firmware update on our LSI 3008 storage controller. We had to “silent” one HCL check. This is new in vSAN 6.6, the possibility to silence some HCL checks which otherwise appear red.

vSAN enhanced the way it handles the failures. It's now smarter and more predictable. 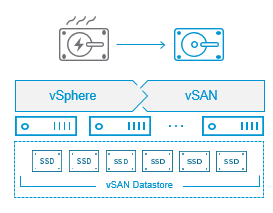 This features watches the exact state of a disk. Will the disk have a failure? If yes, then let’s move the data elsewhere before the disk fails.

VMware claims several ways that they improved the performance of vSAN.

Next-generation applications that are sequential-write intensive such as big data up to 250% with latest flash technologies, like the new 3D Xpoint NVMe drives from Intel.

VMware Hyper-converged infrastructure based on VMware vSAN has already seduced over 7000 clients. It's a great success indeed. It's thanks to a simplicity of deployment and management. This is the 6th release of VMware vSAN already.

The advantage of vSAN is that you can start small, to add more nodes the year after or when needed. You can even start without expensive 10GbE switch by connecting 2 nodes with crossover cables and have a third node (which can be smaller) for the Witness.