Today's objective is VCP6.5-DCV Objective 8.1 – Configure Auto Deploy for ESXi Hosts. Auto deploy is cool. It allows you to boot an ESXi image from the network. Auto Deploy can provision hundreds of physical hosts with ESXi software. You can specify the image to deploy and the hosts to provision with the image. Coupled with host profiles you can apply to the hosts, and vCenter server folder or cluster for each host.

The VCP6.5-DCV Study Guide page is starting to fill up with topics from the Exam Preparation Guide (previously called Exam Blueprint). I highly recommend getting the full vSphere 6.5 documentation set and the latest exam preparation guide (PDF) as well when preparing for the exam. I'm not linking directly in purpose as those PDFs can change URL, but you can find those easily through Google search.

Update: VMware released new “bridge” upgrade path. Any VCP who is two versions behind the most current available version in the same solution track can upgrade to the latest by only taking one exam. Previously, you would first have to earn the VCP6-DCV (by passing the delta exam) and then upgrade to the VCP6.5-DCV (again, through the delta exam.) Now you can go straight from VCP5 to VCP6.5. Note that this is only for current VCP holders. Not expired VCP certifications.

Describe the components and architecture of an Auto Deploy environment

Auto Deploy uses a PXE boot infrastructure in conjunction with vSphere host profiles to provision and customize that host. No state is stored on the host itself, instead, the Auto Deploy server manages state information for each host. Image profiles – Define the set of VIBs to boot ESXi hosts with.

Implement Host Profiles with an Auto Deploy of an ESXi host

You can also use vSphere Auto Deploy to install an ESXi host, and set up a host profile that causes the host to store the ESXi image and configuration on the local disk, a remote disk, or a USB drive. Subsequently, the ESXi host boots from this local image and vSphere Auto Deploy no longer provisions the host. This process is similar to performing a scripted installation.

Rules and Rule Sets – You specify the behavior of the vSphere Auto Deploy server by using a set of rules. The vSphere Auto Deploy rules engine checks the rule set for matching host paĴerns to decide which items (image profile, host profile, vCenter Server location, or script object) to provision each host with.

Rules –  can assign image profiles and host profiles to a set of hosts, or specify the location (folder or cluster) of a host on the target vCenter Server system. A rule can identify target hosts by boot MAC address, SMBIOS information, BIOS UUID, Vendor, Model, or fixed DHCP IP address.

You can specify the following parameters in a rule: You can find the auto-deploy rules within the AutoDeploy UI. Previous releases of vSphere had to use PowerCLI. Before you can manage vSphere Auto Deploy with rules that you create with PowerCLI cmdlets, you must install PowerCLI. For the Auto Deploy GUI to be visible in vSphere Web Client, both the Image Builder and Auto Deploy services must be running. You should have the ImageBuilder Service up and ruuning… Install TFTP server next. We'll need a windows machine. (usually, we can use DHCP server, if it's Windows DC, which has also a role of DHCP). I usually use the Free TFTP server from Solarwinds.

The installer creates a default directory which can be changed. I changed mine to c:tftp to keep it simple. You can configure the option by going to File > Configure menu. While there, make sure that you start the service. (Note: you can also go to Windows services to make the TFTP service start automatically during the boot as by default it has manual start only). 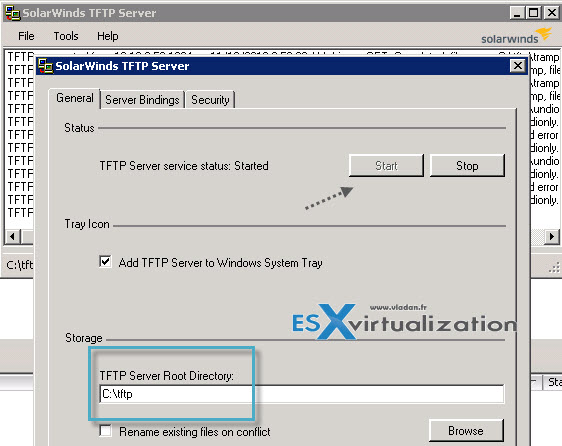 That’s it for TFTP server. There is nothing else to play with and we can move on.

Next, I’ll show you the options you need to configure on your DHCP server. There are just two options which need to be configured at the scope level of the DHCP server. When you click on the Autodeploy icon in vSphere client, you’ll end up on this page where you can see some strange name of file.

But this exact name will be needed for setting up options in our DHCP server! It’s the undionly.kpxe.vmw-hardwired.

Note that vSphere 6.5 supports UEFI for TFTP as well. PXE booting with UEFI firmware is possible with either IPv4 or IPv6.

So next step is to click and download the TFTP boot zip files to the c:tftp directory that we created and set up on our TFTP server. Unzip the file into the same directory You should have a view like this:

Once done, we can copy this name of the file (undionly.kpxe.vmw-hardwired) as an option 67 in our DHCP server. In my case I have Windows DHCP server which sits on my domain controller.

Now you should configure each of your ESXi host’s BIOS to boot from network.

Please use PDF called “vSphere ESXi vCenter Server 6.5 installation and setup” for the study of this topic. the PDF is really good and detailed.

Last but not least, one must think “availability” as Autodeploy server is also a single point of failure (SPOF). It's important to make autodeploy highly available within management cluster (yes, it's recommended to have a separate management cluster).