In this post, we will go into details between VMware vSphere Standard vs Enterprise Plus license. We have already touched a little bit on VMware licensing questions and covered VMware vCenter Standard vs Essentials. But vCenter server and ESXi are different products, with different licensing options.

Both software products are part of the VMware vSphere suite. Each ESXi host (server) has to be licensed with a serial number. Even for the ESXi Free version, you have to enter a serial number. Check out How-to Apply VMware Free License to VMware ESXi.

Some people are still uncertain between the differences between vSphere and ESXi, or vCenter Server. Recently we have written a useful and pretty long post explaining What is The Difference between VMware vSphere, ESXi and vCenter. If you're not sure, starting with VMware virtualization, then don't wait, read it. It's for beginners.

VMware vSphere Standard vs Enterprise Plus

First of all, both licenses are per physical CPU socket. It means that if you plan to acquire new server for your virtual infrastructure, you plan to have a server which has two physical CPUs inside, you'll have to buy two Standard or two Enterprise Plus licenses to cover this host.

You already know that if you have more than 4 hosts you'll need vCenter Server Standard (not vCenter Essentials).

You might think that there are none? Yes, there are. As you know, in every release VMware improving the vMotion capability. While the storage vMotion is present in vSphere Standard version, too, they introduced Cross-vSwitch / Cross-vCenter / Long Distance / Cross-Cloud vMotions. And all those are present only within an Enterprise Plus license.

A long-distance vMotion is present since vSphere 6.0. An RTT (round-trip time) latency of 150 milliseconds or less, between hosts. The cross vCenter and long distance vMotion features require an Enterprise Plus license. Check all different vMotions in our detailed post here: What is VMware vMotion?

VMware FT is an ultimate protection for VMs. Zero downtime. If an underlying host goes down, the secondary VM becomes primary (in less then a second) and new secondary copy is created immediately by cloning.

VMware Fault Tolerance (FT) has historically used vLockstep technology, which had been replaced in vSphere 6.0 by another technology called fast checkpointing to keep primary and secondary VMs in sync. My detailed post – VMware vSphere 6.0 allowing to configure 4vCPU in an FT protected VM. 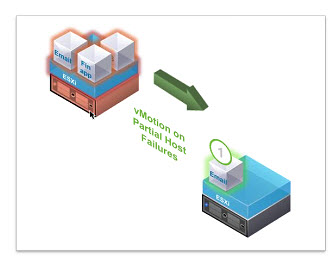 vSphere Standard does not have that feature. Proactive HA will work with hardware provided OEM vendors (HP, Dell, Cisco or others). Those vendors have their own hardware monitoring system, and there will be a vSphere plugin.

Once the monitoring system has a fault, vCenter will get alerted and you’ll be able to choose what to do. The idea is to vMotion VMs of the host before more problems on that particular host occur. It is more like for partial host failures or better say degraded hosts state, where a host has a component failure.

You’ll be able to configure what to do depending on what kind of failure the host is experiencing. (type of failure).

You can configure how Proactive HA responds when a provider has notified its health degradation to vCenter, indicating a partial failure of that host.

Can you live without rebalancing your cluster? Then you only need vSphere Standard, not Enterprise Plus. vSphere DRS is not present within a “Standard” release. If your workloads and VMs runs without control, with regular spikes, there is a congestion each time VM needs more memory or CPU.

With DRS enabled cluster, vMotion kicks-in automatically and moves the VM to a host which has enough resources. VMware DRS is pretty much the feature I'd like to get if I had to choose between versions…

DRS got enhanced within vSphere 6.5. View from the lab via HTML 5 client…. You might want to check the latest post about the enhancements: VMware vSphere 6.5 – HA and DRS Improvements.

To me, if you have more than 4 hosts and you do network changes often, get “Enterprise Plus” and vDS. If not, think of limitations of the “Standard” and get “just” the vSphere Standard, without vDS.

Standard does not have it, Enterprise Plus does provide this possibility. Need it?

You’ll be able to encrypt the VMDK and the VM home files. There is no modification within the guest OS. It does not matter which OS you’re running (Linux, Windows, DOS, iOS) or on which storage the VMs files are located (NFS, block storage, VSAN….). The encryption is happening outside of the Guest OS. The guest does not have an access to the keys. Read More in our post – VMware vSphere 6.5 – VM Encryption Details.

Same as DRS, Standard does not have it, Enterprise Plus does have it. It seems that VMware really wants us to go for the “Enterprise Plus” making the Standard feels pretty much basic, but it all depends on your needs and requirements.

Again, those features are only in the Enterprise Plus version.

Two posts (older) I can recommend here from my VCP6-DCV Guide:

Not in the “Standard” version either….. Hmm, we're touching the “holy grail”. Managing ESXi host configuration via host profiles allows you to keep your infrastructure config homogenous. Applying changes is easier and keeping track of things too.

Standard – No. Enterprise Plus – Yes. It accelerates workloads. Flash Read Cache supports write-through or read caching. Write-back or write caching are not supported

Could we go further?

We could go further to comparing vSphere Standard and Enterprise Plus. But you got the picture. Standard = basic. Enterprise Plus = A “Plus Plus” version, with everything packed in. By taking of the VMware “Enterprise” which was the “middle” one version, the choice is more simple IMHO. If money isn't the main problem, I'd go definitely for the Enterprise Plus, and probbably the one with vCOPs etc… called vSOM.

Here is an overview of all features differences between VMware vSphere Standard and Enterprise Plus versions. We'll talk about vSOM in one of our future posts. I could continue in listing features not present in the vSphere Standard, but as I said previously, It's all about business requirements. I think the vSphere Standard covers the basic virtualization features, even for larger enterprises, as you're not limited in number of physical hosts.

But the Enterprise Plus has features which can assure zero downtime (FT), distribute load across your DRS enabled cluster, and save more time with features such as vDS or become more efficient with DPM. (even though I haven't seen many environments using it). There are certainly one or two points I would not be able to live without. DRS/sDRS or vDS are just a few of them.

The vSphere Essentials or Essentials Plus licenses are limited to 3 hosts only. Sure, you get vCenter Server Essentials bundled with it, but you still have the hard limit of 3 hosts for centralized management only.